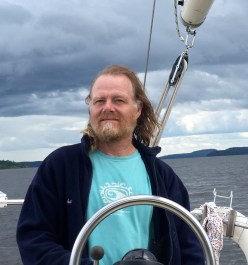 Note: this page has also been hit by our disappearing photo mystery…. we’re working on it. In the meantime, you can use your imagination to fill in the gaps. 😉

It seems like a dream. The sounds of instruments echoing off of the walls with the counting of metronomes and tapping of feet on the dense maple floors in that grand old Victorian home conjures up memories of my life right through university. I grew up in a musical household, my parents were both singers and music filled every pore of my early life. Instruments competed with one another and at times, it seemed as though we were living in a music studio. Violently contrasting sounds, echoed from my sister’s Bach cello suites in one room, while Bach cantatas rang out on the oboe in another and my father worked on a musical choir score, chord by chord, tapping out the rhythm once and then again, on the piano, echoing off of the 9 foot ceilings in the large living room on the main floor. My mother set aside a promising singing career to raise me and my 4 siblings instead of pursuing her musical talent. She won the Rose Bowl in 1965, a competition directed by the CBC (Canadian Broadcasting Corporation – for those of you not familiar with that institution) and at the time, she was pregnant with me – you could say I was a live aboard! Later in life, it’s pleasing for me to note, that she sought out other creative avenues and poured all of her energy into the product of the potter’s wheel and lumps of clay. This is something that feels very fitting for my mother to have done, with her solid connection to the earth. Her delightfully hand painted nature designs brought many smiles to the faces of people walking with armloads of her pottery, moving in for a purchase. My father spent his working life teaching students to sing in the classical style at Wilfrid Laurier University (a.k.a. Laurier) in Waterloo, Ontario. Having been immersed in a house full of artists, I naturally followed a similar path up until my 20’s, enrolling in Honors Music at Laurier. I studied oboe and conveniently hitched a ride with my father to school for several years while I worked on my degree.

I frequently played the oboe 6 hours a day or more, and between orchestra, quintet, competitions, lessons, rehearsals and , let’s not forget, all of the core courses, there wasn’t much time or energy left. Examining the lives of my oboe teacher and of my father, I had a good window into the life of a professional musician. Although I had a lot of interest and maybe even some talent for the profession, I often found myself daydreaming and even sneaking away to hike, canoe or camp with my friends, work on my mother’s car, or build an imposing 14 room, purple martin bird house, than spend the kind of time required to maintain the level of perfection demanded by a musical profession. I had so many other interests and not the focus required to give it my all and as my father used to say, “if you don’t want to do music above everything else, then do something else because it’s not an easy way to make a living”. I had pretty much already lived that life, playing piano, playing oboe, singing and being involved in choirs and orchestras, musicals and operas since I was very young.  It was time for a change.

After university in the late ‘80s, I sold my oboe, gave the money back to my parents and hit the road, backpacking around Australia and New Zealand. Then, in the early ‘90s, I motorcycled on an XT350 Yamaha one year and then an old 70’s Honda Goldwing the next, around the east and west coasts of Canada. When I got back, I had a few courses left to graduate. While at Laurier, I noticed a posting for a volunteer position in northern Ontario. So, on a whim, I volunteered for a summer of scientific research in the old growth red and white pine forests of Temagami, Ontario with Ancient Forest Exploration and Research (AFER). The next year, thoroughly beaming from my experience in the northern woods, I enrolled in a biology program, which lead to 25 years of wandering around in the forests of northern Canada, observing every bird, mammal and plant for a living. I often received a strange look and a “that’s an odd combination” from people when they my noted my change from music to biology to which I often answered that the beauty of music and the beauty of nature fulfilled similar emotional needs for me. It was the artist in me that was captivated by the beauty inherent in petal of a flower and the sweetness of the melody in the birds that I learned to identify by sound.

Since this blog is about sailing, let me make some connections. In my early 20’s, I played around on a friend’s 22 foot drop keel sailboat in Lake Erie, Ontario. We didn’t sail a lot, but it was enough to create some of the most memorable experiences of my life. We mostly stayed close to our home port of Port Rowan on Lake Erie, and only once, trailered the boat to Hamilton harbour where we sailed up to Oakville. It was a beautiful, warm summer night with air so still and liquid, it matched the water lapping up along the sides of the hull. A late evening storm was threatening to the east and it felt like there was a halting of breath in the air, a silence, and a waiting of the fury that could eventually overtake the vessel. I’ll never forget the feeling of drifting along so peacefully in that soft glow of early darkness, wine glass in hand, CBC playing late night jazz on the radio and the beauty of the water, lit up by the cities’ starry reflection. 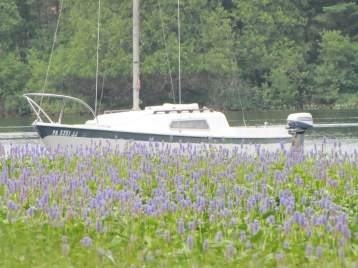 Looking forward 25 years, I had a chance to buy into a boat similar to the one of my early experiences. I became co-owner of an old Cal 21 in need of a lot of TLC. Being too busy with work which usually required me to be away during the summer months, I mostly moored the boat near the end of each field season on a little bay at the edge of my property on Trout Lake in North Bay. The boat was a great home office from which to go through my bird recordings and write reports. It was also a great place to enjoy the sounds of late summer dragonflies buzzing over the transom and skimming along the water or to smell the lovely vanilla-like scent of the white water lilies lying unassumingly alongside the hull in this little protected paradise. 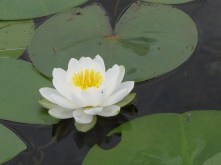 Facing the fact that I was still a novice sailor, I only sailed it a couple times on my own and was fairly content to use it as a floating dock for the time being. You see, I had yet to build a dock down there at the waters’ edge since it was lower on the priority list than building a place that I could keep warm for the winter.

My former partner and I had researched and dreamt of building an energy efficient straw bale house and this property was purchased with that in mind. When she departed in 2008, I was left with 130 acres of forest, vacant of any dwelling or any building of any kind, save for the cute little outhouse – a pleasurable place from which to survey the landscape. Being a bit of a survivalist, thank goodness, I felt I had no choice but to try and fend off the imposing winter temperatures of down to -40 in a trailer with no water, electricity or the like. For sure, this piece of land was very close to my heart and had more diversity and beauty than any other place I could ever hope of living. I had no interest in paying rent in the city and the property wouldn’t have afforded enough financial reward to buy a house. Along with the end of a marriage went the dream of building an energy efficient building using straw bale construction. Or did it? 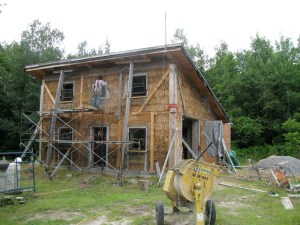 Three years went by and I felt like I needed to begin moving on from my previous relationship, so at the end of 2011, I went online to begin looking for someone to share this lifestyle with. Shirley and I found each other within a couple days and it she tells me that what caught her attention most was the sight of someone doing something different ( like me-standing beside a wall of straw). I quickly learned that she was not afraid of this simple life of mine and to the contrary, she came with a lot of experience! Also, something else that became apparent was that she was interested in sailing and had the notion to sail off into the sunset, so to speak. Early in our relationship, she began to grease the wheels of a consummate dreamer, with ideas about taking a course in the BVI’s and learning how to sail. Once every few weeks during our early writings to one another (which could fill volumes), she would send me an advertisement regarding the above and add a few comments about how much fun it would be. I started to dream, and before long, I had researched the perfect cruising boat for us to launch ourselves into boat ownership and set the final dreaming mode into high gear. 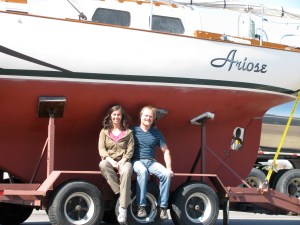 Long story short, we bought the boat and began to make plans to check out the cruising lifestyle.

We’ve shared more about our boat and our cruising intentions in the other “About” pages,  so feel free to check those out too.