February 18, 2018 In Uncategorized By Shirley 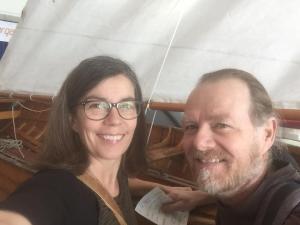 It’s been 6 months since we returned from our adventure, and land life is well underway. How are we doing? Hmm. Generally just fine. At times, though, it is like we’ve secured our docklines a little too loosely, but haven’t noticed until we are stepping ashore. One foot on the dock and one remaining on Ariose’s deck with legs in an ever-widening stretch … yearning to be two places at once. That sort of describes it. We are enjoying the comforts, security, and stability of home, the beauty of winter, and for me, the challenge of work – at the same time – we long to be aboard Ariose. We are craving the warmth, the spectacular tropical waters, and the allure of cruising life. We wonder how all the other cruisers we met along the way are doing. 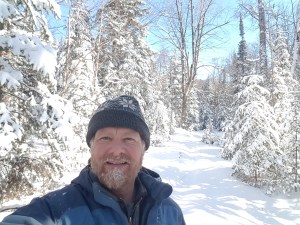 Many aspects of our day-to-day existence are not so dissimilar to life aboard. We’re living off-grid, in what some would say are quite primitive conditions. We collected plenty of rainwater before the freezing temperatures set in, but with the shortened mid-winter days limiting sunlight, and solar-charged batteries that are not holding what little charge they get very well, we rarely are able to use the pump to get that water to our sink or shower. Unlike on the sea, though, when we need fresh water, we have the convenience of stepping outside to scoop snow and melt it on the woodstove. It’s a bit of a process, though, when we want – or need – to bathe. 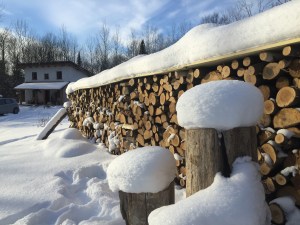 We don’t have the tropical sun’s warmth, but rather, wood warms us multiple times: as we take down trees, as we gather and cut the logs, split and stack them, and finally, as we burn them. I say “we”, but Tim has more time available than do I, so more correctly I should say “he”. Wood cooks our food and keeps Tim fit. 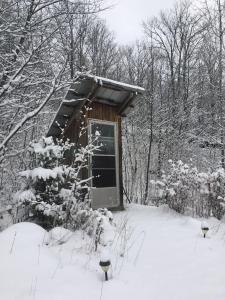 Our “restroom” set-up is rather basic. We have had some extreme cold this winter, and a December stretch of -30 degree days motivated me to create an alternative to our outhouse by extracting the composting head from Ariose. La voila! We now have indoor facilities. Tim’s still stoically toughing it out in the outdoor facilities.

We’ve begun to rebuild our cruising kitty. I’ve secured employment coordinating a community mental health program. Despite being under-resourced and under-supported for years, these teams of skilled compassionate people have still managed to deliver solid care to our clients. I’m looking forward to helping the program realize its full potential.  It has been alarming, after only two years since I stepped away from my career, to find that the saltwater’s corrosive effects had taken their toll on more than Ariose’s stainless steel. Three months after I have resumed work, and finally, the rust is being scraped off the neurons serving the professional parts of my brain. It is taking way more effort than I expected to rebuild my short-term memory and multi-tasking capacity, and it’s tough to maintain high-energy for the work-day without fully depleting my reserves by days’ end. Waking to an alarm is still painful, but I am adjusting to having my days determined by a schedule completely removed from nature’s dictates. 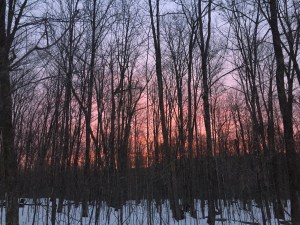 For me, it has been especially hard to adjust to indoor life, especially for the last couple of months when my commute to work and back home has been in the darkness. The days are lengthening, and so I’m now enjoying sunrise and sunset skies en route. My work is office-based, and with no windows in most of my workspace, I’m feeling nature-deprived. Once at work, I’m really enjoying my role and have a great team of colleagues, but oh, I long for the weekends and being able to snowshoe through our woods. There’s a short-cut between 2 sections of my work facility, taking me from a stairwell’s emergency exit about 20 steps outdoors to the entrance to my teams’ office. I grab every opportunity to take this route for a breath of fresh air and a quick skyward glance. 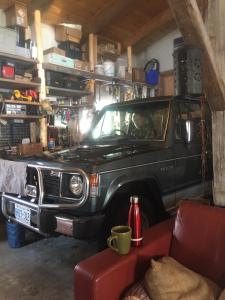 Tim has yet to find paid employment, but that is not a bad thing. In fact, the look on his face as I head out each day suggests that he’s relieved that it’s me not him. There is plenty to do. When not keeping us supplied with wood and tackling fix-it projects, he’s focussed on working on his treasured right-hand drive Mitsubishi Pajero. He says he will sell once it is in tip-top condition. I have my doubts. It’s not that I doubt that he will soon have the jeep-like truck in perfect shape. Many times while we were aboard, I witnessed what Tim’s perseverance can accomplish. I suspect, though, that he may not have the heart to part with it.  I think I have mentioned in previous posts that the structure we are living in is technically a garage. Tim built it, with a bit of assistance from me thrown in, as an exercise in learning about straw-bale construction. Our intent is to eventually put that knowledge toward building a home. For now, the garage provides low cost, and relatively comfortable accommodation. But, it is still a garage, and the Pajero shares our living space. Now and then while Tim is relaxing on the couch in front of the fire, I catch him reaching out to caress his beloved. 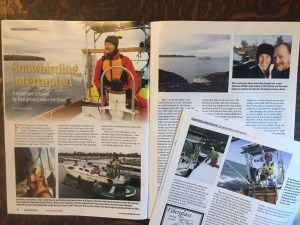 Once January hit, we both were in need of a sailing fix. We were delighted to get the January/February issue of Good Old Boat and see our article in print, but rather than satisfy, this only served to intensify the itch. Our Lake Ontario to the Bahamas and back memories were calling. A charter-a-boat-in-the-Caribbean-type get-away is beyond our means, but we had a closer-to-home option. We had been invited by the Great Lakes Alberg Association (GLAA) to attend their Annual General Meeting. We had originally declined, but Cathie, the Commodore, then mentioned that we had been nominated for some awards, and trying not to let the cat out of the bag, she urged us to reconsider. The AGM coincided with the Toronto International Boat Show. A weekend of immersion in the boating world was just what our spirits longed for. 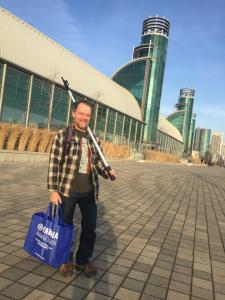 We attended some really interesting seminars, and enjoyed checking out boats and products. It was an affirming couple of days, especially when compared to when we last attended two years ago. Then, I had just quit work and we were beginning serious preparations to make our dream a reality. We were completely overwhelmed at the dazzling options, and filled with nervous anticipation as we tried to soak up as much knowledge as we could without blowing too much of our budget on every shiny piece of hardware. This time, we could hone in on the relevant products and sessions, and ignore the fluff. 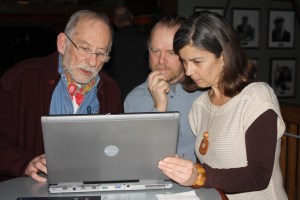 A definite highlight was meeting Yves Gelinas, the famous Quebecois sailor, who provided the inspiration for us to purchase an Alberg 30 in the first place. We caught his seminar during the day, and that evening, got to chat with him at the GLAA dinner. He completed a solo voyage in the early 80s – from France to the Gaspe – in the same boat as ours. That may not sound like an especially remarkable journey until you consider that he went the long way around the world to get to his destination. Yves gave us a personal demonstration of some of the ingenious modifications he made to his boat, and now our to-do list is longer. 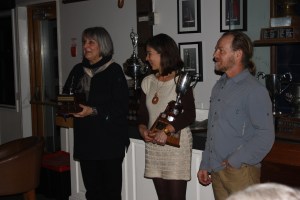 We had a pleasurable evening of kinship with fellow Alberg-owners at the GLAA AGM. Where else could we enjoy such engaging dinner conversation about composting heads and such? We were awarded the Proctor Trophy for most nautical miles sailed in the previous year, and were also honoured, if we may use that word rather loosely, to receive the Bent Fork Award. This is given to the member of the GLAA who has experienced a ‘less than illustrious event’ involving them and their Alberg during the year. We were invited to the podium to recount our rudder-smashing Coast Guard rescue grounding that we experienced less than 24 hours after our departure. Then we were asked to recount the gas-in-the-diesel-tank incident that marred our first attempt at crossing the Gulf Stream. Then we begged to not be asked to recount the dozens more “events” we survived during our voyage. We certainly were well qualified for this award. We look forward to Ariose taking us on more adventures, but hope that our hard-earned experience from our maiden voyage will protect us from future Bent Fork accolades! 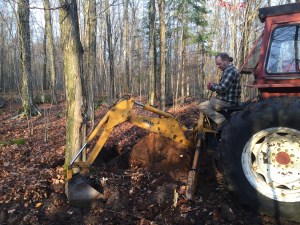 Clearing our house site before the ground froze.

Looking ahead, I think we’re going to continue to feel that stretch I described at the beginning of this post. Seemingly opposing dreams are calling to us. We hope to build a small straw bale house on our forested property. Before the ground froze, we worked at clearing a building site. We also long to get back out cruising for a more extended period next time. During our maiden voyage, we realized that it’s important to both of us to have roots, to have a home to return to, to live in once the cruising ends. But we face a catch-22 of knowing that the time and funds we invest in building will prolong the time before we are able to cast off again.

No decisions are pressing. Despite being caught in the ebb & flow of our wishes, for now, we will focus on enjoying land-life’s offerings while dreaming of future sailing. For now, in our fittingly-named home town of North Bay, the holding ground is good. 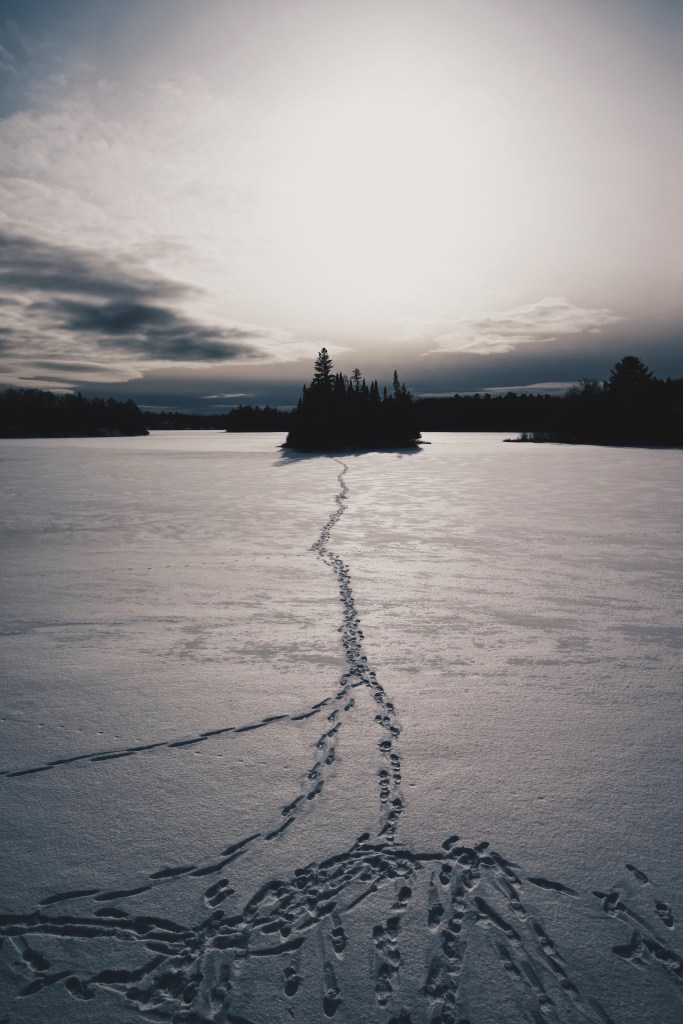 For now, our approach to our neighbouring islands is by foot. Photo by Adrian D.