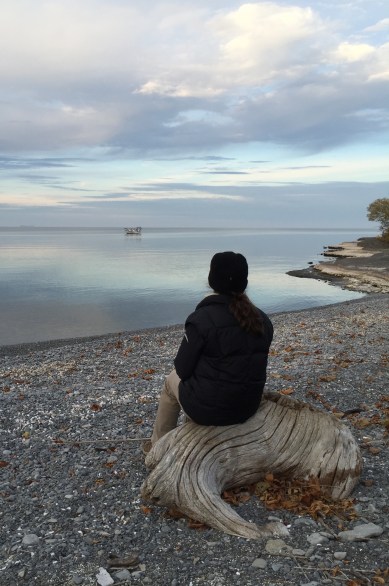 We’ll start this Ariose Note with this image from a peaceful early evening at anchor off Main Duck Island, in the middle of eastern Lake Ontario. Our serene mood on our first night out on this long-planned for adventure was mirrored by the calm waters. We felt grateful for all the support that we had, and for our life circumstances that allowed us this opportunity. We were buoyed by quiet confidence that had grown with each accomplishment over these last months and in the more recent days. Had we known what we would be facing a mere 12 hours later, that mood would have been shattered.

Our last weeks had been such a flurry of final preparations under the shadow of “will we or won’t we make it” pressure. Anyone visiting our property in our absence will surely wonder. It looks like we had fled for our lives, perhaps from marauding forces descending over the North Bay escarpment. Once we made the decision that despite not being as ready as we hoped that we will go anyways, things got a little chaotic. We rushed to make our October 25th departure. On the day of leaving, we threw everything we needed into the truck, shoved furniture aside in our temporary home to then revert it back to it’s original function as a garage to store our vehicles, hooked up Ariose, and were off.   There was no time to tidy the residue of the last months’ work.

My brother Brian generously travelled 4 hours to meet up with us in North Bay, to be our designated driver. He came along as we towed Ariose to Kingston, to then return the truck and trailer after we launched. As he arrived the morning of our departure, I was puzzled to see a second person hop out of the cab. An extra hand was welcome, but was not part of the plans, nor would we have room for another body on this excursion. What a shock when I recognized this extra. 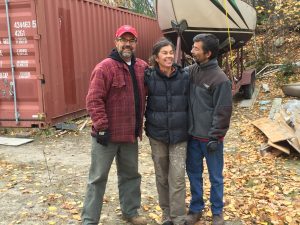 Shirley getting much appreciated support from her big brothers Brian & Dave. 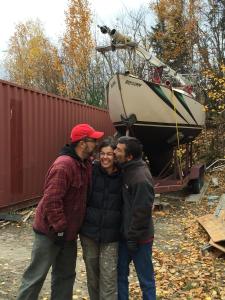 It was my other brother Dave, who years ago departed Ontario for BC, and it has been nearly impossible to coax away from his beloved life in his new-found paradise.   We hadn’t seen each other for a couple years. He had decided on impulse to fly east to say farewell, and to also have some time with our parents. I was so touched. It was already a high emotion day, and having my two big brothers there to support Tim & I really meant a lot (not to mention having much-needed additional brains for last-minute problem solving & brawn for loading!).

Our planned 10 am departure was realized by 3pm. It was a smooth but long journey to Kingston, stopping often to check on the security of our precious load. During our two previous towing experiences, we dealt with a broken axle and a blown tire. This time, we wanted to be sure to spot and hopefully prevent, any issues early.

Brian’s entertaining tales made the trip go more quickly. By 11pm, Ariose was dropped off at the marina, ready for being craned into Lake Ontario the next morning, and we were exhausted but grateful to be tucked into our Air BnB for the night. Tim and I slept fitfully, running through never-ending lists in our heads, remembering things missed, and dealing with withdrawal from the effects of adrenaline overload. 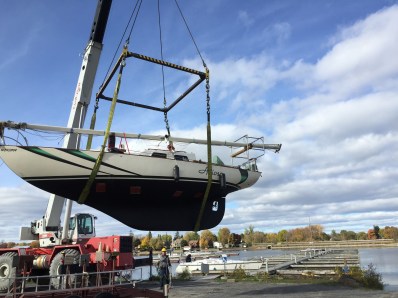 Gerry and his capable crew at Collins Bay Marina gently lifted Ariose in the next day. We faced quite a few challenges through the process of launching and preparing for take-off. “Challenges” is my attempt to put a positive-spin on several “oh no!” events that ranged from mild frustrations through to disheartening “we’re not going to be able to pull this off” moments. We will likely write about them in an upcoming Ariose Note, in part to debrief and possibly to give others an opportunity to learn from our mistakes. For this Note, though, I’ll get back to the week’s lead-up to that lovely anchorage on our first night out. Here’s photos from that week. 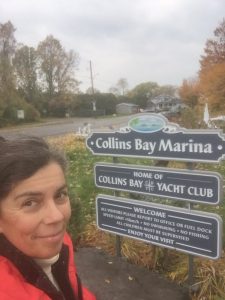 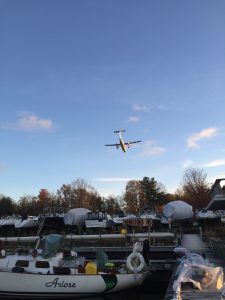 The marina is in direct alignment with Kingston airport. Maybe those low-flying planes were foreshadowing? 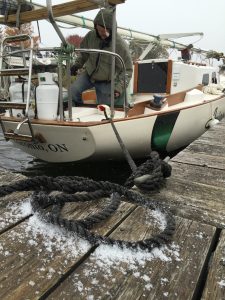 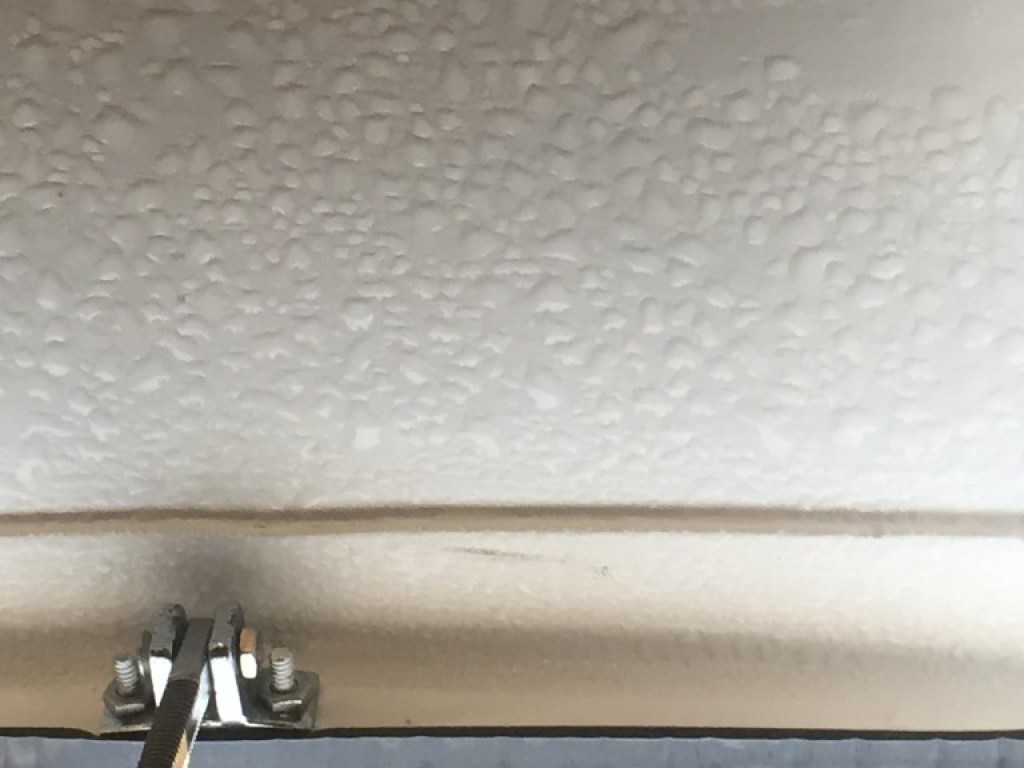 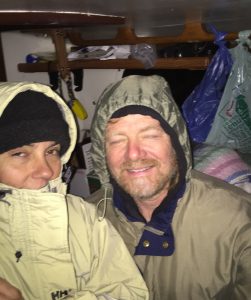 This is how we looked/felt on a typical cold day! 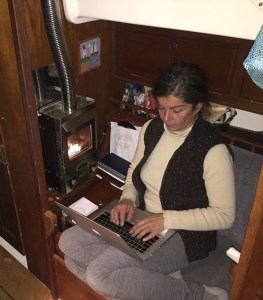 But once the heater had a bit of time to do it’s thing, we were toasty inside. 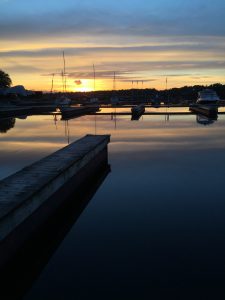 We did have some gorgeous warm days too, and enjoyed the lovely autumn sunsets from dockside. 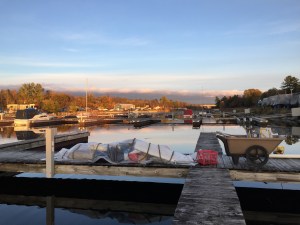 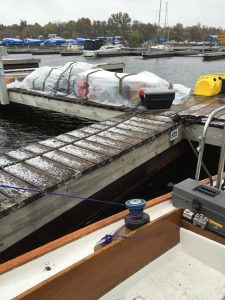 How are we ever going to get all this stuff stowed… 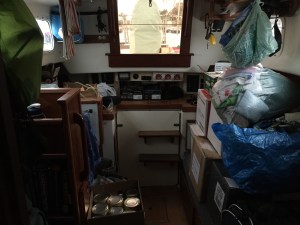 Bulging at the seams! 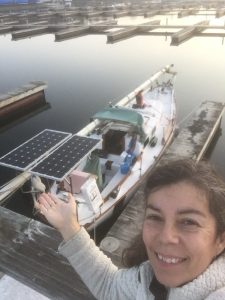 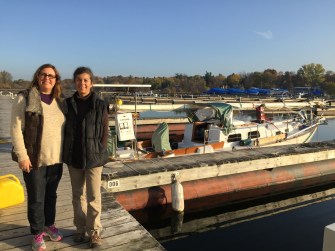 After nearly a week of living aboard dock-side, first in slushy, miserable early winter weather, then in a glorious burst of late fall warm sunny days, our gear was stowed and our essential electrical systems working. Over this week, we met and re-met such wonderful folks, with so many generously sharing their expertise. We look forward to writing more about the people we’ve had the honour of crossing paths with in an upcoming Ariose Note. Some shook their heads at our late-in-the-year start, but most were enthusiastic and encouraging.   We enjoyed our conversations with past cruisers, future cruisers, Phil my Intermediate Coastal Cruising instructor from a couple years ago, and even Sue, my best friend from childhood who by coincidence, lives in the marina neighbourhood. Sue and I met in 1969 –  the same year as Ariose’s construction for whatever that’s worth – and were inseparable as kids. Our adult lives, as often happens, had taken us in different directions. It was touching to be able to reconnect and reminisce.

Finally, armed with advice from knowledgeable locals about the crossing, we were ready. We jumped at the next good weather window. Sue, and her husband Mark stopped by to see us off. With only 10 hours of daylight, which is what it would take for us to motor to the New York Canals entrance in Oswego in favourable conditions, we decided to break the trip into 2 legs. Main Duck Island is a National Park site and it seemed like an interesting place to explore with its prohibition rum running history, dense snake population, and interesting topography. Importantly, though, it also offered safe refuge with a dock we could tie to overnight. 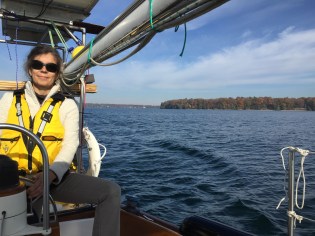 The lake was uncharacteristically calm with 5 knot winds and navigation was straightforward. A thoroughly pleasing day! This was our first experience of being out of site of land, admittedly for a short time, but enough to experience that smug affirmation of seeing the shores of Main Duck rising from the horizon exactly where it was supposed to be.

As we approached the dock, Chris & Jody, a young couple brave (or foolish?) enough to also be heading south so late in the year, warned us of the low water levels. Lake Ontario was 3 feet below its usual. We slowed to a drift, only to feel Ariose nudge to a firm stop on the soft bottom of the protected inlet, just a few feet from the dock. In no time at all, with the help of a tow by our fellow cruisers in their dinghy, we pulled out. Grounded on day one of our adventure! Most cruisers, or at least, we have been told, the honest ones, will admit to having grounded at least once. We laughed. This seemed to be our rite of passage, survived without any hardship. We’re sure to have smooth sailing from here on, we thought. We thought wrong.

We’ll pick up here when we conclude “Launching & Grounding” – as usual, I’ve already gone on a little too long in this one. We’ll post our next Ariose Note in a day or two. See you then. 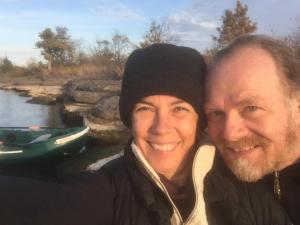