September 30, 2016 In Boat upgrades, Personal Reflections, Projects, What we're up to By Shirley 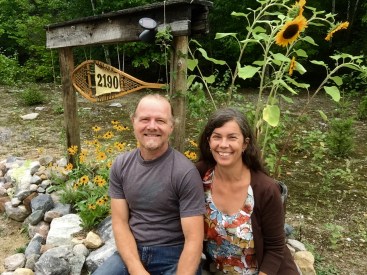 We’re being asked: have we left terra firma yet? Let me just say that the triangle looms, daunting enough to cast jagged shards of anxiety deep into our chests, disturbing our sleep many nights. That may sound like we are well underway, about to leave the security of the Florida coast to cross the Gulf Stream andpass through the south-west corner of the infamous Bermuda Triangle as we head to the Bahamas. We wish. The colour appearing in the leaves confirm summer’s over, and the migrating geese are overhead.  We had expected we would be following them south.

As this Ariose Note’s lead photo suggests, we are still very much on land. Instead of heading toward the Bermuda triangle, we’re facing a much more ominous one: the project management triangle. This massive undertaking – preparing Ariose, our 1969 Alberg 30 sailboat and preparing ourselves as relatively novice sailors – for our cruising adventure has come with many challenges. In management speak, we’re up against the typical triangle of constraints that need careful navigation for successful completion of any major project: time, scope, and cost.

Time. That constraint never worried us. Unbelievably, it’s been over 8 months (!!) since I left work, allowing ample time to prepare. Tim’s seasonal employment wrapped up sooner than expected which although not a good thing in terms of funds, was a great thing in that it doubled our labour force. With our fall getaway deadline so far away, I was pleased to follow Tim’s lead and discover that I did have the ability to nurture the non-productive side of myself, long buried by the demands of parenting, career, volunteering … you know, day-to-day life. We enjoyed many days of slow starts while savouring Tim’s yummy breakfast fare (berries fresh from a morning stroll). We would then leisurely putter on Ariose or casually research what we needed to know, interspersed by long walks in the woods, reading on the front porch hammock (inspirational sailing memoirs and boat maintenance texts, of course), and luxuriate in doing nothing more than enjoying time that was our own. 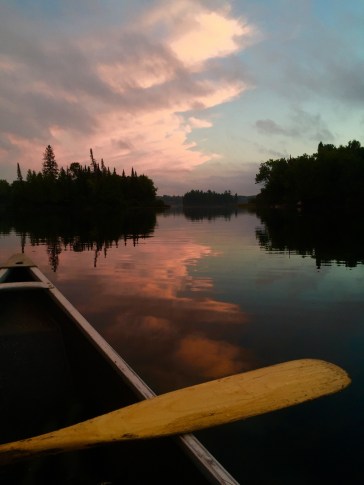 Little did we know, that, like a rear-view mirror perspective, those future dates in the calendar were way closer than they appeared. Our intention is to launch in Lake Ontario, and head to the US Atlantic coast via the New York Canals. The locks close for the season November 15th. No problem. Plenty of time. When the reality hit back in June, though, that our task list looked like it might exceed the time we had, we decided to put a pause on blogging and all other non-necessities. That’s where we left off in our last Ariose Notes post.  I think it was Peter Drucker, the management visionary, who said that plans are only good intentions unless they immediately degenerate into hard work. Well, if the hard work that dominated our summer is any indication, our plans are definitely more than good intentions. Other than a few breaks to spend some precious time with our kids, to attend to other personal business (Tim and his ex wrapped up divorce proceedings that lasted longer than their marriage!), and for me to enjoy a couple trips north to visit with my parents and connect with good friends, work on Ariose dominated our summer. Our pace ratcheted up with each passing week. Even our peaceful days’ end paddles have been squeezed out by a lengthened work-day. We’re now in a rather frantic last-minute push, which isn’t a bad thing. Deadlines sure help us get things done.

Virtually every task over the summer proceeded at a far slower pace than we willed it. Figuring out what we needed, finding the products, and researching the how-to’s often consumed days and days before we were actually able to tackle the task at hand. There were also lots of inefficiencies. Every day brought many trips up the ladder to haul the tools on-board, then often, back over to the garage to fetch forgotten items. Up the ladder, onto Ariose again. Shoot! The shelves for the new galley locker didn’t quite turn out as well as the cardboard template promised – it would be much easier if boat hulls weren’t so rounded!! I just need to angle their edges one more time. Another return to the garage to use the table saw. Side note: the garage, a.k.a. our temporary home, is off grid. The solar panel set-up is well suited for supplying our modest day-to-day electrical needs, but not so ideal for heavier draws. Inevitably, clouds would move in, threatening to cloak the sun needed to operate the saw. I would race inside, flip off all the circuits except the needed one to eliminate any other draw, back out to the saw, start it up and then silence! The promised sun and cloud day had turned to the latter, robbing the saw of it’s needed power and me of my patience. Any possibility of trimming those shelves today was gone. Oh well, plenty of other tasks on the list.

Even when we had the tools and power needed, work on board was often slowed by the awkwardness of doing virtually anything on board. Inevitably, that nut that needed to be loosened was just out of reach, requiring magician-assistant contortionist ability to squeeze into spaces not sized for human occupation. Add to that, at times, fibreglass resin fumes, and/or blistering heat. To think, only a few months ago as we began this work mid-winter, I was longing for warmer temperatures. Short periods of on-board work were often all we could manage. Just click on any image to enlarge and scroll through if you’d like a closer view. 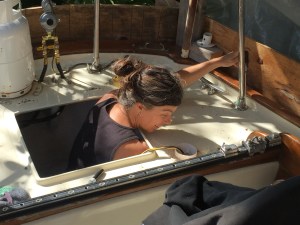 Snapping turtle, making more progress that we were, it seemed, as she passed by Ariose. 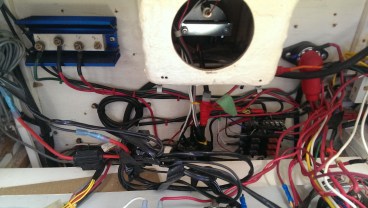 Other time-takers? Tim’s many building and mechanical projects have prepared him so much better than my office career has, although some days, I’ve sure been appreciative of my mental health experience. For both of us, though, the newness to all we were undertaking caused virtually everything to proceed more slowly than it would in the hands of the more experienced. Just figuring out tools and techniques could be arduous. That was pretty presumptuous of me to think that it would be easy to router an opening into that bulkhead when a short time ago I didn’t even know what a router was! Is it 220 grit sandpaper after the primer and 320 between coats or the other way around? I’ll look it up again. I so appreciated Tim tackling the electrical maze. And as novices, we know we are probably making some decisions that the wisdom of hindsight will prove to be mid-guided. Some, we’ve already realized.  Like the water tank for example. The trauma of that one is still a little too fresh to go into too much detail. Suffice it to say that after ripping out the existing water bladders and plumbing and putting myself through the extreme discomfort of cutting open the v-berth in mid-winter’s bitter conditions to build a new integral tank there, I realized that with the cost (food-grade resin = $800!!) , and possible health risks (that resin has only been tested on commercial-size tanks), not to mention my pitiable fibreglass skills, proceeding in that direction just wasn’t wise. So instead, I swallowed my pride and rebuilt the v-berth back to an ugly duckling version of what was. We bought new bladders that Tim installed. And guess where we decided to put them? In the exact same location where they had been! Argghhhh! So after many many hours – make that days – of work and a couple hundred dollars in cutting tools and supplies, we’re pretty much back to where we started with our fresh water system. What did we gain from that experience?  A few things: potable water tanks (almost 200 litres); additional storage under the newly configured v-berth (about 2 cubic feet); and learning (more than can be calculated!). Okay, maybe I’ve recovered enough to share some of the sordid details on this one project – check out the photos. 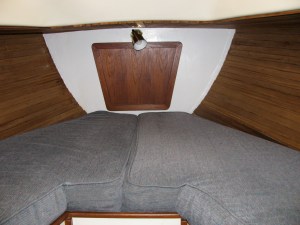 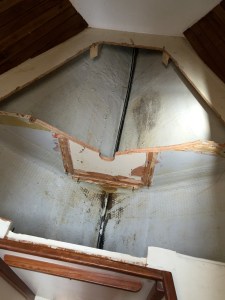 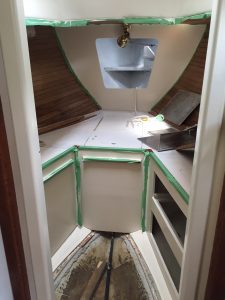 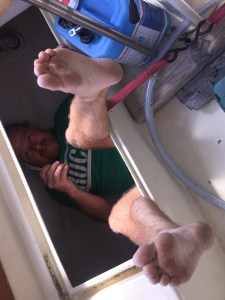 Yeah, I’m comfortable. Why do you ask?

The pressure of time continued to mount as the calendar marched on. That first red leaf on the forest floor marked summer’s end forcing us to face the possibility that we may not make it on our cruising adventure this fall. We still have an imposing to-do list and costs continue to rise. We’ll share a bit more about those sides of that ominous project triangle in a few days. For now, though, the thermometer has risen above 10 degrees which means I can get the final coat of paint on Ariose’s deck this morning. Back to work! 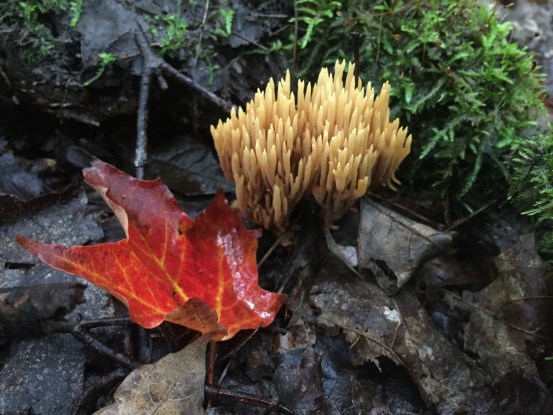