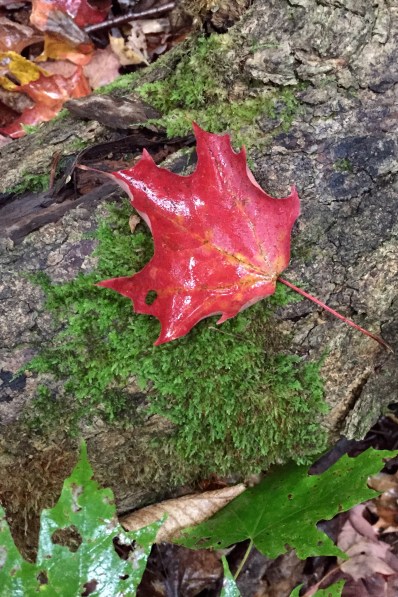 Our blog home page proclaims our “north-of-49” perspective.  Actually, we bring a north-of-49 point of view x 2! What do we mean? 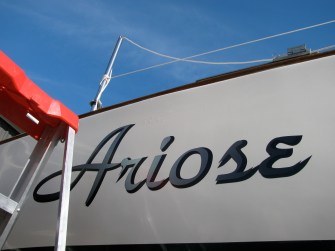 Our last two posts describe how we discovered not only the Alberg 30, but this particular one, in London, Ontario.  A few weeks after finding Ariose, we were back.

It was a beautiful

END_OF_DOCUMENT_TOKEN_TO_BE_REPLACED 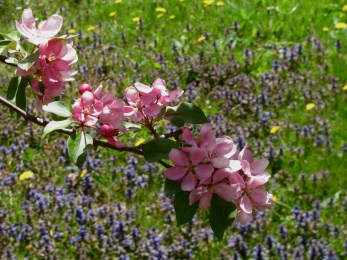 Easter weekend of 2014 was approaching. As usual the last few years,
END_OF_DOCUMENT_TOKEN_TO_BE_REPLACED 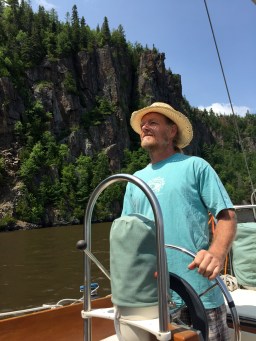 Anyone who knows me can tell you that I’m a dreamer and a little outside the norm, when I start talking about what I plan to accomplish. The internet being a seductive place for dreamers, this dream began to tug at my soul
END_OF_DOCUMENT_TOKEN_TO_BE_REPLACED

Have you heard of Carl Alberg? Less than two years ago, neither of us had heard of the man let alone his boats. Now, Carl Alberg has taken on near legendary status for us – we were dropping his name with the best of them at the Toronto International Boat Show earlier this year – and his Alberg 30 has been finding a place in our hearts while eating a hole in our pocketbook!   Actually, that’s not fair to the reasonably priced Albergs. Outfitting any boat can become pricey, and most Albergs have far fewer requirements in this department than most boats of this vintage. More on its quality in a moment.

Carl Alberg, a Swedish-born American, was one of North America’s most respected yacht designers. The Pearson Triton was one of his notable creations. The Cape Dory Typhoon is another. In fact, he has 47 designs to his credit, some of which continued in production after his passing. His home in Massachusetts, fittingly, overlooked the local harbour.

Not only was Alberg a skilled designer, but it seems that he had a sense of humour too. The Great Lakes Alberg Association (GLAA) has posted a letter from an early owner on its site. This person wrote to Alberg describing several groundings on rock and gravel which resulted in deep scratches. He asked for advice as to the best method to duplicate the boat’s strong construction when repairing the damage. Carl Alberg’s advise? To move to the Chesapeake Bay where the bottom is mud.

The 30 footer is one of the middle children of the large Alberg family. Alberg 22s, 29s, 30s, 34s, 35s, and 37s were produced. A group of sailors from Toronto Yacht Club approached Whitby Boat Works Limited of Whitby, Ontario, Canada in 1961 to design and build a boat to meet their needs. They were looking for a racer/cruiser. They wanted something built from fibreglass (boats were just beginning to transition from wood construction), with a full keel, standing headroom in the cabin, and more. Whitby Boat Works turned to Carl Alberg to design it. Some sailors from the US east coast (Washington DC and Annapolis) also were interested and placed orders. Shortly after, the Alberg 30 was born and the first boat was launched in 1963 (side note: it preceded Shirley’s “launch” by a few months). Subsequently, more than 750 Alberg 30s were produced over a 22 year run.

There continues to be a concentration of Albergs currently in Chesapeake Bay, U.S. and Toronto, Canada, where enthusiastic owners associations keep the vision alive. We’ll include links to their sites at the bottom of this page. Descriptions and testimonials of owners often sound like accounts of love affairs. Here’s why.

As Tim’s shared in an early post [Acquiring Ariose part 1], the Alberg 30 is a beautiful, graceful boat. Its design is true to the early 60s. It’s a distinctive classic boat, with long overhangs, a narrow beam, low freeboard, and a full cutaway keel-attached rudder. Compared to modern boats of similar size, the Alberg’s narrow beam and low freeboard leaves an interior that feels undersized. We think this is a small price to pay co 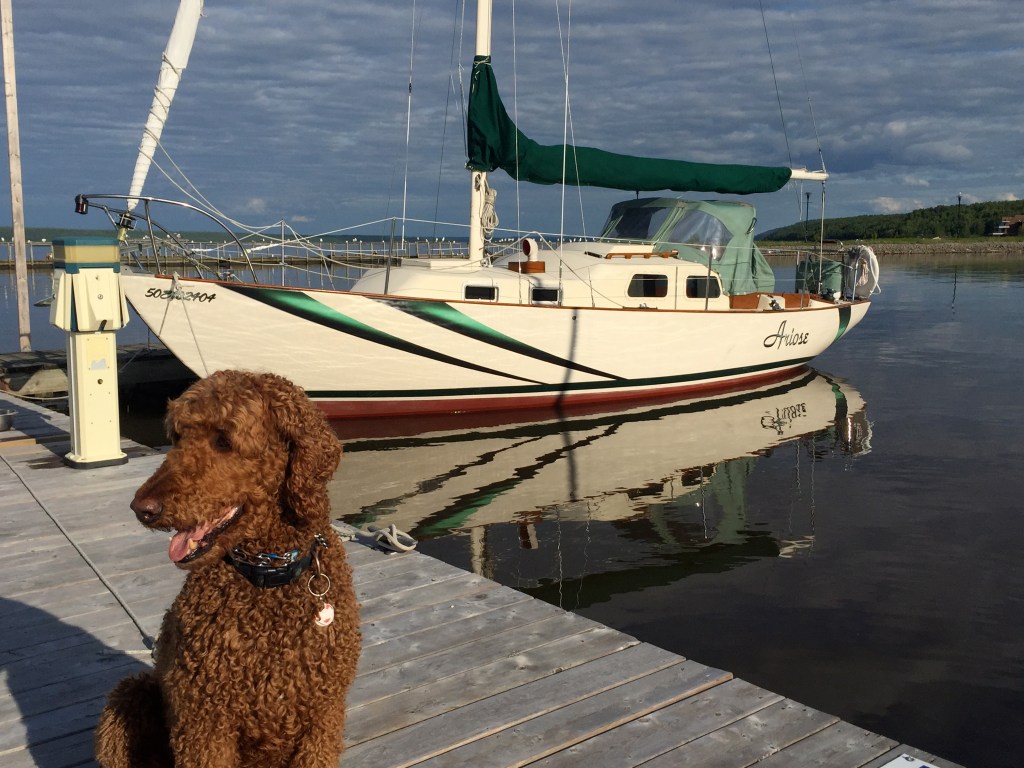 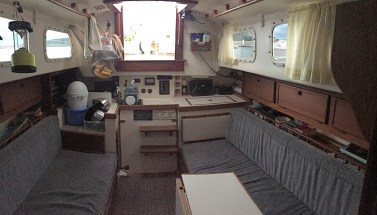 It does technically accommodate a crew of four (two in the v-berth, and two in the main saloon) but they would need to be a group of exceptionally compatible crew we think for that to work. The head (a manual pump toilet), with an integral holding tank is squeezed in opposite a hanging closet, and these divide the v-berth from the saloon. The minimalist galley is in the aft part of the cabin below the companionway. All Alberg 30s had an icebox. Ours had a cut-away in the counter to house a antiquated looking 2-burner propane stove – we’re upgrading to a new marine oven/stove. I think that is project #37 on the list. A previous owner installed a propane heater which was much appreciated during our early season northern Ontario over-nighters … thanks Jordan!

The Alberg 30 seems to be a perfect combination of sturdy and sweet-sailing. Alberg 30s have a reputation for being solidly built. Whitby Boat Works was a highly regarded company and as with others pioneering in the use of fiberglass construction, they were generous, compared to modern methods, in their use of hand-laid fiber and resin. We’ve come across many accounts of groundings over the years with hardly a scratch resulting. Thankfully, we have yet to have an occasion to support or refute this claim.

A fiberglass composite rudder is attached to the keel, and a 3300 pound iron ballast is encapsulated inside the keel cavity – that should keep it upright! The deck and cabin house are constructed of fiberglass cloth and a core was used in areas for added strength. Boats built prior to 1970 utilized masonite as a core material while those built after used balsa wood. There’s quite a few reports of problems with the masonite getting soft. Some folks have taken on ambitious projects replacing the deck. Our deck seems fine, but we will know better once we open it up to do some other work. Fingers are crossed!

The cockpit and lazarette are at the stern. The mast is deck-stepped. Early boats had a laminated wood beam to support the mast and this has proven to be one another of the Alberg’s few weak points. There have been situations of failure after hard use. Most boats from that era have been retrofitted with an aluminum plate to support that area, and this seems to be an effective repair. In 1970 this was replaced by an aluminum beam encased with fiberglass. The final design flaw we’re aware of is a weakness in the attachment of the forward lower shroud chain plates. A previous owner beefed this up on Ariose … thanks, Bill and Christine!

Of course, most Alberg 30s have some problems as would be expected from the normal wear and aging of any vintage boat. We’re ever so grateful for the good care previous owners have given to our boat. She’s in good shape.

Originally the Alberg 30s were powered by the twenty-two horsepower Gray Marine gasoline engine, and then later by the Universal Atomic 4 engine. In later years of production, diesel engines were available (single cylinder Bukh diesel, followed by two cylinder Volvo Penta marine engine). Some Albergs still have their original engine. Ours has been re-powered with a Yanmar 3GM30 diesel …. thanks, once again, Bill!

Originally, Alberg 30s were outfitted with a tiller, but many, ours included, the tiller has been replaced with a wheel.

DATING OUR BOAT – VARIATIONS OVER THE YEARS.

Our Alberg, according to 2 surveyors who based their documentation on information from the owners at that time, was built in 1971. There is no visible hull number, though, which would give it a positive identification. Its sail number is 392. If that is correct, and this sail is not a hand-me-down from another boat, Cathie Coultis, Commodore of the Great Lakes Alberg Association, through consulting Whitby Boat Works Shipping Manifest & Order Cards, has advised us that #392 was produced in 1969. At that time, the Alberg 30 was going through some changes. The main differentiating features were that the older boats had a laminated wood mast beam, no liner, masonite cored decks, their decks drained directly overboard under the toerail, and the upright icebox was accessible from the cabin and the cockpit. Newer boats had an aluminum mast beam, balsa cored decks, decks drained through hoses to cockpit scuppers, molded fiberglass pan forms cabin sole and support for furniture, and the icebox is top loading from the cabin only. It’s likely that boats starting with #409 were the newer design. Whitby Boat Works made ongoing incremental changes, and there are also a few transition boats (such as #371) that share characteristics of both, with many variations over the years when tailoring boats individual customers. Of course, most boats have had subsequent upgrades and modifications to suit successive owners. It is likely that no two boats are exactly alike.

Our boat leans toward having the features of newer Alberg 30s: mast beam (uncertain, but no signs of stress so either newer or repaired older), no liner that we can tell (older), deck (uncertain, but in good shape, so likely newer – will find out when we install some deck equipment this summer), toerail/scupper drain (newer), icebox cabin opening (newer – much to Tim’s chagrin when he thinks of the easy access to cold beer from the cockpit that he could have had).  We’re not sure which vintage of Albergs came with their own standard poodle guard dog as ours does.

So, when we assemble the pieces of this age puzzle, Ariose was built in:

No definitive results, it seems.  The mystery continues. We’ll stick with assuming it is a 1969 unless new information comes to light… we like the notion of Ariose being born in the same decade we were.

As mentioned before, the Alberg 30 is known to be forgiving to sail and seaworthy enough to cross oceans. It has many circumnavigations to its credit – quite remarkable considering its relatively small size. We’ve come across accounts of 4 solo circumnavigations. We have yet to decide if this breeds confidence for us duo sailers or not. After all, if people can sail it singlehanded around the world, it must be fairly straightforward for two to do some small scale off-shore sailing? Or, does its cozy confines preclude comfortable companionship? We’ll see. 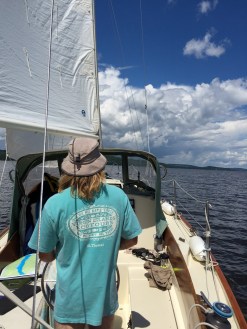 When the Alberg 30 was designed, it was considered a relatively quick boat, but not so much by modern day racing standards. We’re not interested in racing at this time, so that’s okay. The boat will not point particularly high to windward, and we find it seems happiest at a beam reach to close reach. We’ve read that the Alberg 30 shines when the going gets rough as its narrow beam allows it to slice through the waves. Modern designs that boast about ample cabin space will have their crew well tossed when in heavy seas. The Alberg 30 is said to comfortably be able to heave-to to wait out storms, although that’s probably a relative assessment as it’s hard to imagine using the words “comfortable” and “storms” in the same sentence.

SPECIFICATIONS (data from from GLAA site) 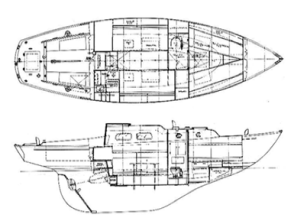 And that’s it from us for now about our boat, Ariose, the Alberg 30.